This month we celebrate the ten-year anniversary of el Aleph – it’s hard to believe a decade has passed by! Among our team there have been marriages, babies, and new faces and farewells along the way, but what we remember most are the amazing expeditions and adventures we have shared together with our wonderful guests from around the world.

Indonesia is a magnificent archipelago to explore and we are all extremely thankful to Eric Kraus, the builder and driving force behind el Aleph. The conception of such an incredible vessel to travel these phenomenal waters was always Eric’s vision – and it has been more than realized. Here Eric shares his personal insight into his last ten years with el Aleph.

So, a warm-hearted thank you to Eric and especially to all of our guests who we have had the pleasure of sharing memories with – we look forward to exploring for many more years to come. 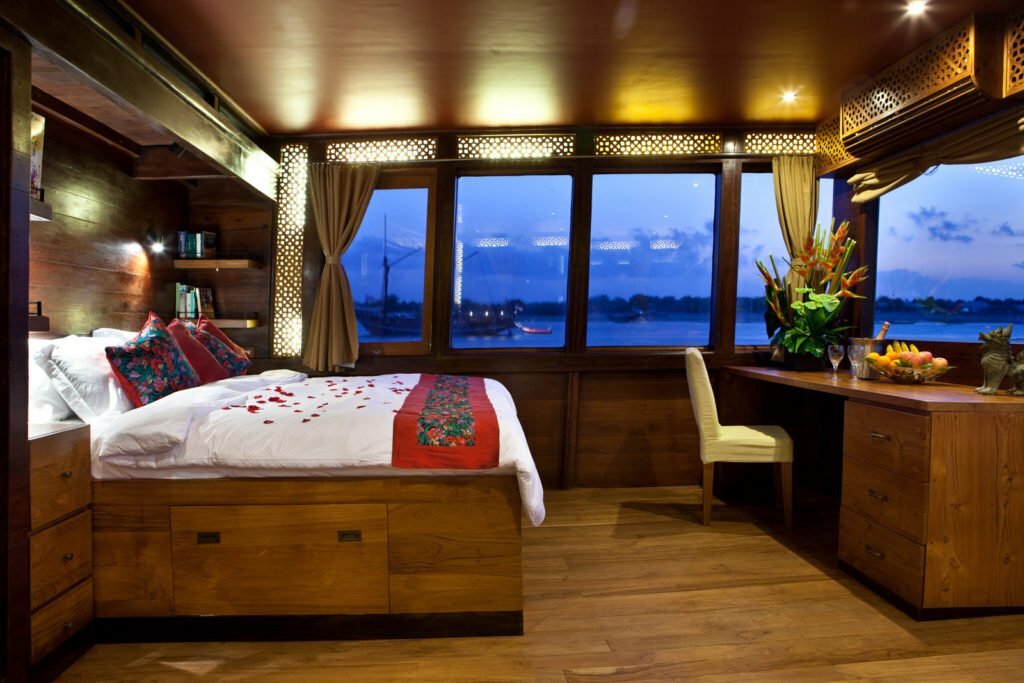 We built el Aleph as an owner’s yacht beginning in 2006 with our maiden voyage in late 2008 – and our first highly successful luxury charter in September 2009.

Since then, I’ve been aboard with family 2-3 months each year, and between times, we’ve had more than 60 successful charters.  We are proud to say that el Aleph has operated under the same ownership, the same management, and (largely) the same crew since our first baby steps in building in South Sulawesi!

13 years ago we had come to Bali to realize the dream: building a fine traditional ironwood and teak yacht to cruise the Indonesian archipelago. I had long worked and travelled in Asia, and had been diving pretty much the world over, but had always heard the mythical names of Raja Ampat and Komodo – the ultimate ocean paradises. Especially at the time – transportation was challenging in East Indonesia – interminable ferry rides under rough conditions and a total lack of infrastructure in West Papua. There was world-class diving, amazing bird-watching, fascinating cultural forays – surely the adventure of a lifetime – but how to do it?

And then, traveling in Sulawesi I chanced to see some of the great Phinisis in Makassar harbour – traditional schooners plying the waters of the archipelago carrying manufactured products east to the Banda Sea and Papua, returning on the East Monsoon with cargoes of spices and exotic forest products. Elegant, round-bottomed and stable, extremely spacious and highly sea-worthy – what a wonderful yacht one would make! The concept of el Aleph was born!

Fortunately, our Balinese friends knew of a Hadji – a native boat-builder in Tanabiru, Sulawesi whose family had been building these ships for five generations at least. Over a series of visits to Makassar we laid down the plans for a 38meter ship, the hull built strictly along traditional lines – broad-beamed, heavily timbered, but with the interiors to be designed by the fine carpenters and craftsmen of Bali and the nautical engineering by Singaporean specialists.

After a year of hard work on the beaches of Tanabiru the hull was finally finished and el Aleph, was ready for her first baby steps. As the tides rose, she was painstakingly hauled down the beach for our first, nervous crossing to Bali – with only a basic engine and simple navigation aids. But on our arrival in Bali we jumped suddenly from the 19th to the 21st Centuries – as our designers, carpenters, diesel specialists, electricians, radar techs, and a host of others swarmed aboard. I joined in with our two teams of 50 carpenters and cabinet makers – working from dawn until well into the evening, sawing and fitting and sanding – while the technical groups installed the state-of-the art logistics.

If the initial building of el Aleph was traditional – the ship just a picture in the Hadji’s mind, slowly built up from the hull as they’ve done for centuries – in Bali modernism took hold – everything carefully measured with laser sighting, 3-dimensional computer design, each piece of furniture specially built in a digitalized export furniture facility, then painstakingly fitted aboard el Aleph. Not a speck of plastic in sight – tens of thousands of man hours sanding and polishing until the fine wood finishings were more reminiscent of a fine guitar than of a ship.

A year later and el Aleph was ready for our first sea trials, and of course, all the teething problems appeared at once. The sailing permits hadn’t yet been issued, the radio-license was blocked – the anchor winch was making strange noises, two new crew from Surabaya hadn’t yet arrived, and sufficient fuel hadn’t been loaded. As I nervously paced the deck of a very stationary el Aleph snarling like an irate bear, I noticed out on the bowsprit several of our Balinese crew performing the traditional Hindu offerings to the sea-demons. Turning to our General Manager, Gusti Putra, I laughed, “Fine, Gusti, we need all the help we can get!…but won’t Captain Kahar (a Buginese Moslem) take offense?”

“I really don’t think so Mr Eric” replied Gusti, “It was Captain Kahar who ordered them to do it!” (when in Bali – simple common sense requires that the Balinese gods should be propitiated!)

A day later and everything had fallen miraculously into place – as we left the harbour steaming out towards Flores after two years of struggle, everyone’s heart stood still. How would el Aleph perform on the sea? The currents were running against us, the ocean choppy, and yet el Aleph drove forward as if it were nothing at all – steady and stable she breasted the waves and our usually very reserved Buginese Captain Kahar, who’d been with us since the laying down of the keel, turned to me and allowed himself a broad smile, “She’s good ship – I am very proud!”

During the years of building, I had steadfastly refused to go to Komodo or Raja Ampat, vowing that I would go first aboard el Aleph – only my manic faith assuring me that I would love it… and I did – I really did! The Komodo diving was spectacular; the landscapes breathtaking, the sea teaming with life, the hills glowing red in the afternoon sun, the distant volcanoes outlined against the evening sky. We dived and snorkelled, paddled our sea kayaks, and K. learned to water ski and wake-board. We trekked amongst the fearsome Komodo dragons with the monkeys watching warily from the branches. Returning to Bali two weeks later, there were still a thousand details to be fixed, but the adventure had begun! And West Papua still lay in wait….

A month later, in early October, the time for crossing the Banda Sea aboard el Aleph and into the mythical Raja Ampat which had gripped my dreams for so many years had finally arrived! The first experience of Raja Ampat is indescribable. All the Cousteau films of my childhood came flooding back, the sea boiling with fish, crazy coloured fusiliers, parrotfish, rainbow runners, a thousand tuna, and trevally shooting through the schools of jack, feeding on the fly. The gentle, lumbering whale sharks weighing in at 7 tonnes, schools of dolphins jumping across the bowsprit, kayaking through the amazing mangrove forests of Wayak. We swam, snorkelled, dived, trekked and were hungry to take it all in. From Sarong to Wayak, down through Misool, into historic Ambon with the old Dutch Spice-Island trading ports and forts protecting what was once the world’s most valuable colonial possessions, before finally flying home from Ambon to Bali to prepare for the next adventure.

Our first long journey a few months later was north to Langkawi, Malaysia, then on to Thailand and then the Mergui peninsula of Burma and finally the Andaman/Nicobar Islands of India before returning via Singapore stopping in for the yacht show. A fascinating trip, full of adventure, storms and colourful characters, and yet had we really seen anything which could match the Indonesian seas? No. Not really.

Indonesia has it all, spectacular diving which is far better than Mergui or the Andamans (not to mention the badly damaged Thai reefs), deserted white sand beaches, a very predictable climate with long calm seasons, and quiet anchorages with not another ship in sight…and 17,000 major islands to explore! Since that time, el Aleph, proud of her Indonesia flag, has sailed the full length of the world’s greatest archipelago, and we still have so much left to explore!

By September 2009 the time had finally come – totally confident in our creation, the crew intimate with every detail of the ship, we were finally ready for our first commercial charter – two families of friends from the financial industry, who until then had chartered in San Tropez/Nice/Mallorca, came aboard at Sorong Harbour.

You want luxury cruising? I had asked. Real luxury is not 3 types of champagne and a plate of hors d’oeuvres every fifteen minutes, while lined up at a quayside being ogled by the tourists. We can offer you the champagne and all the canapés you can dream of but with, as an extra bonus, miles of empty white sand beaches fringed with palm trees and coral reefs; watching the Milky-way light up the sky on the cloudless nights of the Southern hemisphere; playing with the kids in the warm oceans, dolphins and whales… quite frankly, it doesn’t get any more luxurious than that!

Since those first hesitant steps the East Monsoon Cruising team has successfully managed more than 60 commercial charters. From friends, families, and colleagues, to professional technical divers (El Aleph has full gas-mixing, helium trimix, and rebreather facilities), English bird-watchers (the forests of Raja Ampat are a birder’s paradise!), American whale-watchers, Asians off on their first exploration of their warm seas, and Balinese expats who know Komodo and the Banda Sea at least as well as we do…

We’ve hosted teams of scientists and cameramen studying cetaceans and the reef, several conservation groups and NGOs (including Planet Deep and Oceanic Society). Our chef can manage every diet imaginable from vegan to all meat (paleolithic), gluten-free to full-on Italian…though my personal preference is for Asian fusion, Mediterranean style with plenty of freshly caught fish and shellfish, aromatic Thai soups, tropical fruit, and fresh vegetables. Our youngest guest was just 5 months old and the oldest was 83. Dozens of children have discovered the white sand beaches, the amazing wildlife of Komodo, snorkelling the amazing coral reefs, and being adopted by our Indonesian crew for the voyage of a lifetime.

If you’d like to discover the Wallace Line, cruise the Coral Triangle and explore some of the most pristine regions in the Indonesian Archipelago, contact us by using our contact form –  or email us at info@elalephcruising.com; and we will promptly reply.

Please note that we are not a yacht agency — your enquiries will be addressed directly by el Aleph’s owner – Eric Kraus. All of our charters are custom designed to suit your tastes and interests. For your comfort and privacy, we accept bookings for full boat charter only — not by the cabin.